IELTS Reading Practice Test
Seed vault guards resources for the future
Fiona Harvey paid a visit to a building whose contents are very precious.
About 1,000 km from the North Pole, Svalbard is one of the most remote places on earth. For this reason, it is the site of a vault that will safeguard a priceless component of our common heritage – the seeds of our staple crops. Here, seeds from the world’s most vital food crops will be locked away for hundreds or even thousands of years. If something goes wrong in the world, the vault will provide the means to restore farming. We, or our descendants, will not have to retread thousands of years of agriculture from scratch.
Deep in the vault at the end of a long tunnel, are three storage vaults which are lined with insulated panels to help maintain the cold temperatures. Electronic transmitters linked to a satellite system monitor temperature, etc. and pass the information back to the appropriate authorities at Longycarbyen and the Nordic Gene Bank which provide the technical information for managing the seed vaults. The seeds are placed in scaled boxes and stored on shelves in the vaults. The minimal moisture level and low temperature ensure low metabolic activity. The remote location, as well as the rugged structure, provide unparalleled security for the world’s agricultural heritage.
The three vaults are buried deep in the hillside. To reach them, it is necessary to proceed down a long and surprisingly large corridor. At 93.3 metres in length, it connects the 26-metre long entrance building to the three vaults, each of which extends a further 27 metres into the mountain. Towards the end of this tunnel, after about 80 metres, there are several small rooms on the right-hand side. One is a transformer room to which only the power company officials have access – this houses the equipment needed to transform the incoming electrical current down to 220 volts. A second is an electrical room housing controls for the compressor and other equipment. The oilier room is an office which can be heated to provide comfortable working conditions for those who will make an inventory of the samples in and out of the vault.
Anyone seeking access to the seeds has to pass through four locked doors: the heavy steel entrance doors, a second door approximately 90 metres down the tunnel and finally the two keyed doors separated by an airlock, from which it is possible to proceed directly into the seed vaults. Keys are coded to allow access to different levels of the facility. A work of art will make the vault visible for miles with reflective sheets of steel and mirrors which form an installation acting as a beacon. It reflects polar light in the summer months, while in the winter, a network of 200 fibre-optic cables will give the piece a muted greenish-turquoise and white light. Cary Fowler, the mastermind behind the vault, stands inside the echoing cavern. For him, this is the culmination of nearly 30 years of work. ‘It’s an insurance policy,’ he explains, ‘a very cheap insurance policy when you consider what we’re insuring – the earth’s biological diversity.’
Seeds are being brought here from all over the world, from seed banks created by governments, universities and private institutions. Soon, there will be seed varieties from at least 100 crops in the Svalbard vault – extending to examples of all of the 1.5 million known crop seed varieties in the world. If any more are unearthed. either in the wild or found in obscure collections, they can be added, too – the vault has room for at least 4.5 million samples. Inside the entrance area it is more than 10°C below freezing, but in the chambers where the seeds are kept, refrigerators push down the temperature even further, to -18oC. At this temperature, which will be kept constant to stop the seeds germinating or rotting, the wheat seeds will remain viable for an estimated 1,700 vears, the barley for 2000 years and the sorghum for 20,000 years.
Svalbard’s Arctic conditions will keep the seeds cold. In order to maintain the temperature at a constant -10° C to -20° C, the cold Arctic air will be drawn into the vault during the winter, automatically and without human intervention. The surrounding rock will maintain the temperature requirements during the extremely cold season and, during warmer periods, refrigeration equipment will engage. Looking out across the snow-covered mountains of Svalbard, it is hard not to feel respect for the 2,300 or so people who live here, mainly in Longyearbyen, a village a few miles away. There are three months without light in winter.
Svalbard is intended 3s the seed bank of last resort. Each sample is made up of a few hundred seeds, sealed inside a watertight package which will never be tampered with while it is in the vault. The packages of seeds remain the property of the collections they have come from. Svalbard will disburse samples ‘only if all the other seeds in other collections around the world are gone,’ explains Fowler. If seeds do have to be given out, those who receive them are expected to germinate them and generate new samples, to be returned to the vault.

Choose NO MORE THAN TWO WORDS OR A NUMBER from the passage for each answer. 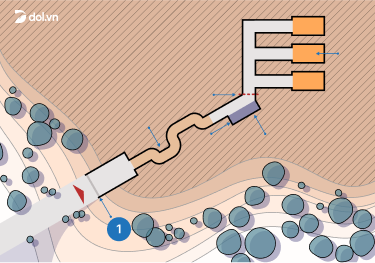 mirrors
﻿
and metal panels which maximise natural light.
﻿
A tunnel, which is

93.3 metres
﻿
long, connects the entrance building to the vault.
﻿
Seeds are processed in the

office
﻿
before they go into the vault.
﻿
The

electrical current/current
﻿
is reduced as it enters the vault.
﻿
The entrance to the seed vault itself is protected with doors with

an airlock
﻿
between them.
﻿
The seeds are conserved by the cold and lack of

Locate
Paraphrasing
Question: The installation in the entrance consists of mirrors and metal panels that maximize natural light.

Câu 1 + 2 => The installation made by steel and mirrors reflects polar light.