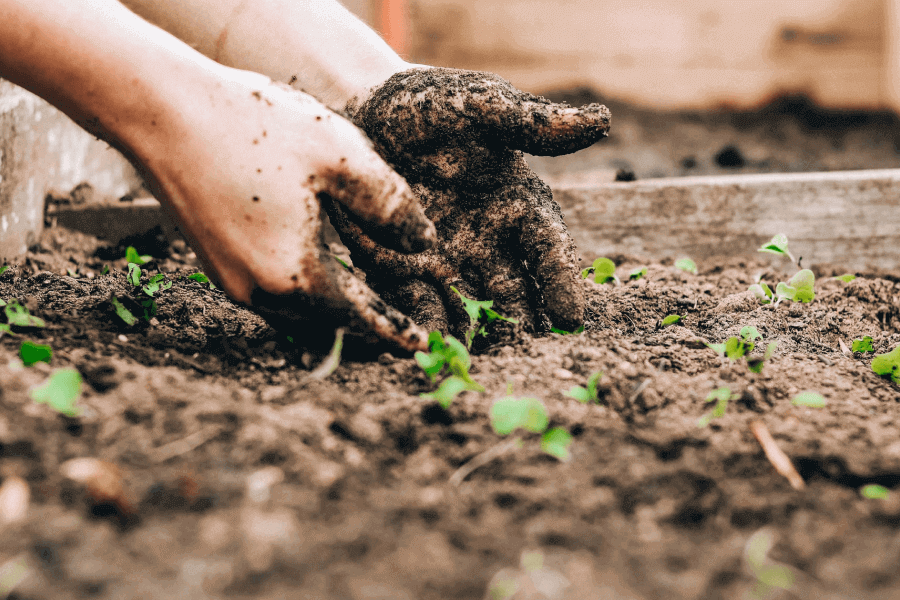 Saving The Soil
A
A. More than a third of the world’s soil is endangered, according to a recent UN report. If we don’t slow the decline, all farmable soil could be gone in 60 years. Since soil grows 95% of our food, and sustains human life in other more surprising ways, that is a huge problem.
B
B. Peter Groffman, from the Cary Institute of Ecosystem Studies in New York, points out that soil scientists have been warning about the degradation of the world’s soil for decades. At the same time, our understanding of its importance to humans has grown. A single gram of healthy soil might contain 100 million bacteria, as well as other microorganisms such as viruses and fungi, living amid decomposing plants and various minerals. That means soils do not just grow our food, but are the source of nearly all our existing antibiotics, and could be our best hope in the fight against antibiotic-resistant bacteria. Soil is also an ally against climate change: as microorganisms within soil digest dead animals and plants, they lock in their carbon content, holding three times the amount of carbon as does the entire atmosphere. Soils also store water, preventing flood damage: in the UK, damage to buildings, roads and bridges from floods caused by soil degradation costs £233 million every year.
C
C. If the soil loses its ability to perform these functions, the human race could be in big trouble. The danger is not that the soil will disappear completely, but that the microorganisms that give it its special properties will be lost. And once this has happened, it may take the soil thousands of years to recover. Agriculture is by far the biggest problem. In the wild, when plants grow they remove nutrients from the soil, but then when the plants die and decay these nutrients are returned directly to the soil. Humans tend not to return unused parts of harvested crops directly to the soil to enrich it, meaning that the soil gradually becomes less fertile. In the past we developed strategies to get around the problem, such as regularly varying the types of crops grown, or leaving fields uncultivated for a season.
D
D. But these practices became inconvenient as populations grew and agriculture had to be run on more commercial lines. A solution came in the early 20th century with the Haber-Bosch process for manufacturing ammonium nitrate. Farmers have been putting this synthetic fertiliser on their fields ever since. But over the past few decades, it wasn’t such a bright idea. Chemical fertilisers can release polluting nitrous oxide into the atmosphere and excess is often washed away with the rain, releasing nitrogen into rivers. More recently, we have found that indiscriminate use of fertilizers the soil itself, turning it acidic and salty, and degrading the soil they supposed to nourish.
E
E. One of the people looking for a solution to this problem is Pius Floris, who started out running a tree-care business in the Netherlands and now advises some of the world’s top-soil scientists. He came to realise that the best way to ensure his trees flourished was to take care of the soil, and has developed a cocktail of beneficial bacteria, fungi and humus* to do this. Researchers at the University of Valladolid in Spain recently used this cocktail on soils destroyed by years of fertiliser overuse. When they applied Floris’s mix to the desert-like test plots, a good crop of plants emerged that were not just healthy at the surface, but had roots strong enough to pierce dirt as hard as rock. The few plants that grew in the control plots, fed with traditional fertilisers, were small and weak.
F
F. However, measures like this are not enough to solve the global soil degradation problem. To assess our options on a global scale we first need an accurate picture of what types of soil are out there, and the problems they face. That’s not easy. For one thing, there is no agreed international system for classifying soil. In an attempt to unify the different approaches, the UN has created the Global Soil Map project. Researchers from nine countries are working together to create a map linked to a database that can be fed measurements from field surveys, drone surveys, satellite imagery, lab analyses and so on to provide real-time data on the state of the soil. Within the next four years, they aim to have mapped soils worldwide to a depth of 100 metres, with the results freely accessible to all.
G
G. But this is only a first step. We need ways of presenting the problem that bring it home to governments and the wider public, says Pamela Chasek at the International Institute for Sustainable Development, in Winnipeg, Canada. ‘Most scientists don’t speak language that policy-makers can understand and vice versa.’ Chasek and her colleagues have proposed a goal of ‘zero net land’degradation’. Like the idea of carbon neutrality, it is an easily understood target that can help shape expectations and encourage action. For soils on the brink, that may be too late. Several researchers are agitating for the immediate creation of protected zones for endangered soils. One difficulty here is defining what these areas should conserve: areas where the greatest soil diversity is present? Or areas of unspoilt soils that could act as a future benchmark of quality. Whatever we do, if we want our soils to survive, we need to take action now

Question 1 - 4
Complete the summary below.
Write ONE WORD ONLY from the passage for each answer.
Write your answers in boxes on your answer sheet.
Why soil degradation could be a disaster for humans
Healthy soil contains a large variety of bacteria and other microorganisms, as well as plant remains and
1
﻿ It provides us with food and also with antibiotics, and its function in storing
2
﻿ has a signicant eect on the climate. In addition, it prevents damage to property and infrastructure because it holds
3
﻿ If these microorganisms are lost, soil may lose its special properties. The main factor contributing to soil degradation is the
4
﻿ carried out by humans.
Question 5 - 8
Complete each sentence with the correct ending, A-F, below.
Write the correct letter, A-F, in boxes on your answer sheet.
List of Endings
A
may improve the number and quality of plants growing there.
B
may contain data from up to nine countries.
C
may not be put back into the soil.
D
may help governments to be more aware of soil-related issues.
E
may cause damage to different aspects of the environment.
F
may be better for use at a global level.
Nutrients contained in the unused parts of harvested crops
5
Synthetic fertilisers produced with Haber-Bosch process
6
Addition of a mixture developed by Pius Floris to the soil
7
The idea of zero net soil degradation
8
Question 9 - 13
Reading Passage has seven paragraphs, A-G.
Which section contains the following information?
Write the correct letter, A-G, in boxes on your answer sheet.
NB You may use any letter more than once.
9
a reference to one person’s motivation for a soil-improvement project
10
an explanation of how soil stayed healthy before the development of farming
11
examples of dierent ways of collecting information on soil degradation
12
a suggestion for a way of keeping some types of soil safe in the near future
13
a reason why it is dicult to provide an overview of soil degradation