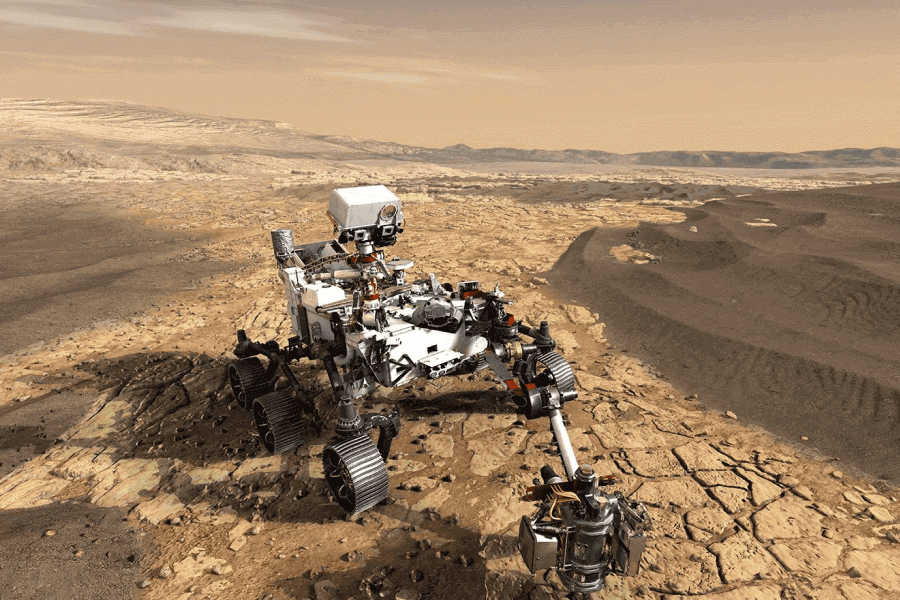 Space: The Final Archaeological Frontier
Space travel may still have a long nay to go, bur the notion of archaeological research and heritage management in space is already concerning scientists and environmentalists.
In 1993, University of Hawaii’s anthropologist Ben Finney, who for much of his career has studied the technology once used by Polynesians to colonize islands in the Pacific, suggested that it would not be premature to begin thinking about the archaeology of Russian and American aerospace sites on the Moon and Mars. Finney pointed out that just as todays scholars use archaeological records to investigate how Polynesians diverged culturally as they explored the Pacific, archaeologists will someday study off-Earth sites to trace the development of humans in space. He realized that it was unlikely anyone would be able to conduct fieldwork in the near future, but he was convinced that one day such work would be done. There is a growing awareness, however, that it won’t be long before both corporate adventurers and space tourists reach the Moon and Mars. There is a wealth of important archaeological sites from the history of space exploration on the Moon and Mars and measures need to be taken to protect these sites. In addition to the threat from profit- seeking corporations, scholars cite other potentially destructive forces such as souvenir hunting and unmonitored scientific sampling, as has already occurred in explorations of remote polar regions. Already in 1999 one company was proposing a robotic lunar rover mission beginning at the site of Tranquility Base and rumbling across the Moon from one archaeological site to another, from the wreck of the Ranger S probe to Apollo 17 s landing site. The mission, which would leave vehicle tyre- marks all over some of the most famous sites on the Moon, was promoted as a form of theme-park entertainment. According to the vaguely worded United Motions Outer Space Treaty of 1967. what it terms ‘space junk’ remains the property of the country that sent the craft or probe into space. But the treaty doesn’t explicitly address protection of sites like Tranquility Base, and equating the remains of human exploration of the heavens with ‘space junk’ leaves them vulnerable to scavengers. Another problem arises through other international treaties proclaiming that land in space cannot be owned by any country or individual. This presents some interesting dilemmas for the aspiring manager of extraterrestrial cultural resources. Does the US own Neil Armstrong's famous first footprints on the Moon but not the lunar dust in which they were recorded? Surely those footprints are as important in the story of human development as those left by hominids at Laetoli, Tanzania. But unlike the Laetoli prints, which have survived for 3.5 million years encased in cement-like ash. those at Tranquility Base could be swept away with a casual brush of a space tourist’s hand. To deal with problems like these, it may be time to look to innovative international administrative structures for the preservation of historic remains on the new frontier. The Moon, with its wealth of sites, will surely be the first destination of archaeologists trained to work in space. But any young scholars hoping to claim the mantle of history’s first lunar archaeologist will be disappointed. That distinction is already taken. On November 19. 1969. astronauts Charles Conrad and Alan Bean made a difficult manual landing of the Apollo 12 lunar module in the Moon’s Ocean of Storms, just a few hundred feet from an unmanned probe. Surveyor J. that had landed in a crater on April 19. 1967. Unrecognized at the time, this was an important moment in the history of science. Bean and Conrad were about to conduct the first archaeological studies on the Moon. After the obligatory planting of the American flag and some geological sampling, Conrad and Bean made their way to Surveyor 3. They observed that the probe had bounced after touchdown and carefully photographed the impressions made by its footpads. The whole spacecraft was covered in dust, perhaps kicked up by the landing. The astronaut-archaeologists carefully removed the probes television camera, remote sampling arm. and pieces of tubing. They bagged and labelled these artefacts, and stowed them on board their lunar module. On their return to Earth, they passed them on to the Daveson Space Center in Houston, Texas, and the Hughes Air and Space Corporation in El Segundo, California. There, scientists analyzed the changes in these aerospace artefacts. One result of the analysis astonished them. A fragment of the television camera revealed evidence of the bacteria Streptococcus mitis. I or a moment it was thought Conrad and Bean had discovered evidence for life on the Moon, but after further research the real explanation became apparent. While the camera was being installed in the probe prior to the launch, someone sneezed on it. The resulting bacteria had travelled to the Moon, remained in an alternating freezing.' boiling vacuum for more than two years, and returned promptly to life upon reaching the safety of a laboratory back on Earth. The finding that not even the vastness of space can stop humans from spreading a sore throat was an unexpected spin-off. But the artefacts brought back by Rean and Conrad have a broader significance. Simple as they may seem, they provide the first example of extraterrestrial archaeology and perhaps more significant for the history of the discipline formational archaeology, the study of environmental and cultural forces upon the life history of human artefacts in space.

Question 1 - 6
Complete each sentence with the correct ending A-H from the box below.
Write the correct letter A-H in boxes on your answer sheet.
List of Endings
A
activities of tourists and scientists have harmed the environment.
B
some sites in space could be important in the history of space exploration.
C
vehicles used for tourism have polluted the environment.
D
it may be unclear who has responsibility for historic human footprints.
E
past explorers used technology in order to find new places to live.
F
man-made objects left in space are regarded as rubbish.
G
astronauts may need to work more closely with archaeologists.
H
important sites on the Moon may be under threat.
Ben Finney's main academic work investigates the way that
1
Ben Finney thought that in the long term
2
Commercial pressures mean that in the immediate future
3
Academics are concerned by the fact that in isolated regions on Earth.
4
One problem with the 1967 UN treaty is that
5
The wording of legal agreements over ownership of land in space means that
6
Question 7 - 11
Complete the flow chart below.
Choose NO MORE THAN ONE WORD from the passage for each answer.
Untitled
STEP 01
During the assembly of the Surveyor 3 probe, someone
7
﻿  on a TV camera.
STEP 02
The TV Camera was carried to the Moon on Surveyor 3
STEP 03
The TV Camera remained on the Moon for over
8
﻿  years
STEP 04
Apollo 12 astronauts
9
﻿  the TV camera
STEP 05
The TV camera was returned to Earth for
10
﻿
STEP 06
The Streptococcus mitis bacteria were found.
STEP 07
The theory that this suggested there was
11
﻿  on the Moon was rejected.
STEP 08
Scientists concluded that the bacteria can survive lunar conditions.
Question 12 - 13
Choose TWO letters A-E
The TWO main purposes of the writer of this text are to explain
A
the reasons why space archaeology is not possible
B
the dangers that could follow from contamination of objects from space.
C
the need to set up careful controls over space tourism.
D
the need to preserve historic sites and objects in space.
E
the possible cultural effects of space travel.

﻿ Ben Finney , who for much of his career has studied the technology once used by Polynesians to colonize islands in the Pacific