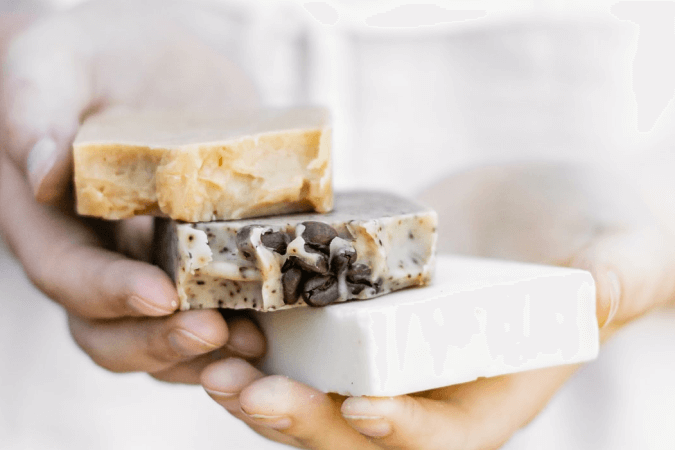 Nowadays, we use different products for personal cleanliness, laundry, dishwashing and household cleaning, but this is very much a 20th-century development.
The origins of cleanliness date back to prehistoric times. Since water is essential for life, the earliest people lived near water and knew something about its cleansing properties – at least that it rinsed mud off their hands.
During the excavation of ancient Babylon, evidence was found that soapmaking was known as early as 2800 BC. Archaeologists discovered cylinders made of clay, with inscriptions on them saying that fats were boiled with askes.
This is a method of making soap, though there’s no reference to the purpose of this material.
The early Greeks bathed for aesthetic reasons and apparently didn’t use soap. Instead, they cleaned their bodies with blocks of sand, pumice and ashes, then anointed themselves with oil, and scraped off the oil and dirt with a metal instrument known as a strigil (Q33).
They also used oil mixed with ashes. Clothes were washed without soap in streams.
The ancient Germans and Gauls are also credited with discovering how to make a substance called ‘soap’, made of melted animal fat and ashes. They used this mixture to tint their hair red.
Soap got its name, according to an ancient Roman legend, from Mount Sapo, where animals were sacrificed, leaving deposits of animal fat. Rain washed these deposits, along with wood ashes, down into the clay soil along the River Tiber.
Women found that this mixture greatly reduced the effort required to wash their clothes.
As Roman civilisation advance, so did bathing. The first of the famous Roman baths, supplied with water from their aqueducts (Q35), was built around 312 BC.
The baths were luxurious, and bathing became very popular. And by the second century AD, the Greek physician Galen recommended soap for both medicinal and cleaning purposes.
After the fall of Rome in 467 AD and the resulting decline in bathing habits, much of Europe felt the impact of filth on public health. This lack of personal cleanliness and related unsanitary living conditions were major factors in the outbreaks of disease (Q36) in the Middle Ages, and especially the Black Death of the 14th century.
Nevertheless, soapmaking became an established craft in Europe, and associations of soapmakers guarded their trade secrets closely.
Vegetable and animal oils were used with ashes of plants, along with perfume, apparently for the first time (Q37). Gradually more varieties of soap became available for shaving and shampooing, as well as bathing and laundering.
A major step toward large-scale commercial soapmaking occurred in 1791, when a French chemist, Nicholas Leblanc, patented a process for turning salt into soda ash (Q38), or sodium carbonate.
Soda ash is the alkali obtained from ashes that combines with fat to form soap. The Leblanc process yielded quantities of good-quality, inexpensive soda ash.
Modern soapmaking was born some 20 years later, in the early 19th century, with the discovery by Michel Eugène Chevreul, another French chemist, of the chemical nature and relationship of fats, glycerine and fatty acids.
His studies established the basis for both fat and soap chemistry, and soapmaking became a science (Q39). Further developments during the 19th century made it easier and cheaper to manufacture soap.
Until the 19th century, soap was regarded as a luxury item, and was heavily taxed in several countries. As it became more readily available, it became an everyday necessity, a development that was reinforced when the high tax was removed.
Soap was then something ordinary people could afford, and cleanliness standards improved.
With this widespread use came the development of milder soaps for bathing and soaps for use in the washing machines that were available to consumers by the turn of the 20th century.

﻿ Sau đó nghe "Since water is essential for life, the earliest people lived near water and knew something about its cleansing properties – at least that it rinsed mud off their hands."