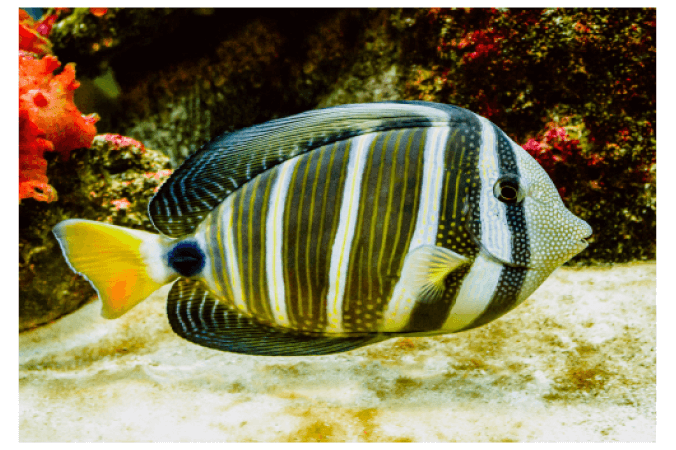 I’ve been looking at ocean biodiversity, that’s the diversity of species that live in the world’s oceans. About 20 years ago biologists developed the idea of what they called ‘biodiversity hotspots’. These are the areas which have the greatest mixture of species, so one example is Madagascar.
These hotspots are significant because they allow us to locate key areas for focusing efforts at conservation. Biologists can identify hotspots on land, fairly easily, but until recently, very little was known about species distribution and diversity in the oceans, and no one even knew if hotspots existed there.
Then a Canadian biologist called Boris Worm did some research in 2005 on data on ocean species that he got from the fishing industry. Worm located five hotspots for large ocean predators like sharks, and looked at what they had in common.
The main thing he’d expected to find was that they had very high concentrations of food, but to his surprise that was only true for four of the hotspots – the remaining hotspots was quite badly off in that regard.
But what he did find was that in all cases, the water at the surface of the ocean had relatively high temperatures, even when it was cool at greater depths, so this seemed to be a factor in supporting a diverse range of these large predators.
However, this wasn’t enough on its own, because he also found that the water needed to have enough oxygen in it – so these two factors seemed necessary to support the high metabolic rate of these large fish.
A couple of years later, in 2007, a researcher called Lisa Balance, who was working in California, also started looking for ocean hotspots, but not for fish – what she was interested in was marine mammals, things like seals
And she found three places in the oceans which were hotspots, and what these had in common was that these hotspots were all located at boundaries between ocean currents, and this seems to be the sort of place that has lots of the plankton that some of these species feed on.
So now people who want to protect the species that are endangered need to get as much information as possible. For example, there’s an international project called the Census of Marine Life. They’ve been surveying oceans all over the world, including the Arctic.
One thing they found there which stunned other researchers was that there were large numbers of species which live below the ice – sometimes under a layer up to 20 metres thick. Some of these species had never been seen before.
They’ve even found species of octopus living in these conditions. And other scientists working on the same project, but researching very different habitats on the ocean floor, have found large numbers of species congregating around volcanoes, attracted to them by the warmth and nutrients there.
However, biologists still don’t know how serious the threat to their survival is for each individual species. So a body called the Global Marine Species Assessment is now creating a list of endangered species on land, so they consider things like the size of the population – how many members of one species there are in a particular place – and then they look at their distribution in geographical terms, although this is quite difficult when you’re looking at fish, because they’re so mobile, and then thirdly they calculate the rate at which the decline of the species is happening.
So far only 1,500 species have been assessed, but they want to increase this figure to 20,000. For each one they assess, they use the data they collect on that species to produce a map showing its distribution. Ultimately they will be able to use these to figure out not only where most species are located but also where they are most threatened.
So finally, what can be done to retain the diversity of species in the world’s oceans? Firstly, we need to set up more reserves in our oceans, places where marine species are protected. We have some, but not enough. In addition, to preserve species such as leatherback turtles, which live out in the high seas but have their nesting sites on the American coast, we need to create corridors for migration, so they can get from one area to another safely.
As well as this, action needs to be taken to lower the levels of fishing quotas to prevent overfishing of endangered species. And finally, there’s the problem of ‘by-catch’. This prefers to the catching of unwanted fish by fishing boats – they’re returned to the sea, but they’re often dead or dying.
If these commercial fishing boats used equipment which was more selective, so that only the fish wanted for consumption were caught, this problem could be overcome. OK. So does anyone have any …

=> do đó khi bạn nghe "These are the areas which have the greatest mixuture of creatures" là bạn biết đáp án sắp tới.