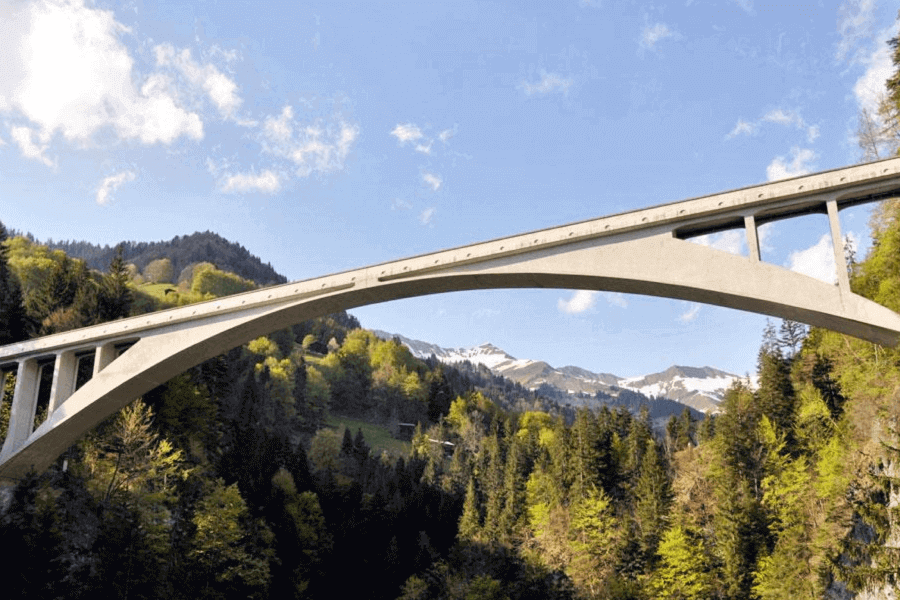 The Revolutionary Bridges of Robert Maillart
Swiss engineer Robert Maillart built some of the greatest bridges of the 20th century. His designs elegantly solved a basic engineering problem: how to support enormous weights using a slender arch.
A
A. Just as railway bridges were the great structural symbols of the 19th century, highway bridges became the engineering emblems of the 20th century. The invention of the automobile created an irresistible demand for paved roads and vehicular bridges throughout the developed world. The type of bridge needed for cars and trucks, however, is fundamentally different from that needed for locomotives. Most highway bridges carry lighter loads than railway bridges do, and their roadways can be sharply curved or steeply sloping. To meet these needs, many turn-of-the-century bridge designers began working with a new building material: reinforced concrete, which has steel bars embedded in it. And the master of this new material was Swiss structural engineer, Robert Maillart.
B
B. Early in his career, Maillart developed a unique method for designing bridges, buildings and other concrete structures. He rejected the complex mathematical analysis of loads and stresses that was being enthusiastically adopted by most of his contemporaries. At the same time, he also eschewed the decorative approach taken by many bridge builders of his time. He resisted imitating architectural styles and adding design elements solely for ornamentation. Maillart’s method was a form of creative intuition. He had a knack for conceiving new shapes to solve classic engineering problems] And because he worked in a highly competitive field, one of his goals was economy - he won design and construction contracts because his structures were reasonably priced, often less costly than all his rivals’ proposals.
C
C. Maillart’s first important bridge was built in the small Swiss town of Zuoz. The local officials had initially wanted a steel bridge to span the 30-metre wide Inn River, but Maillart argued that he could build a more elegant bridge made of reinforced concrete for about the same cost. His crucial innovation was incorporating the bridge’s arch and roadway into a form called the hollow-box arch, which would substantially reduce the bridge’s expense by minimising the amount of concrete needed. In a conventional arch bridge the weight of the roadway is transferred by columns to the arch, which must be relatively thick. In Maillart’s design, though, the roadway and arch were connected by three vertical walls, forming two hollow boxes running under the roadway (see diagram). The big advantage of this design was that because the arch would not have to bear the load alone, it could be much thinner - as little as one-third as thick as the arch in the conventional bridge.
D
D. His first masterpiece, however, was the 1905 Tavanasa Bridge over the Rhine river in the Swiss Alps. In this design, Maillart removed the parts of the vertical walls which were not essential because they carried no load. This produced a slender, lighter-looking form, which perfectly met the bridge’s structural requirements. But the Tavanasa Bridge gained little favourable publicity in Switzerland; on the contrary, it aroused strong aesthetic objections from public officials who were more comfortable with old-fashioned stone-faced bridges. Maillart, who had founded his own construction firm in 1902, was unable to win any more bridge projects, so he shifted his focus to designing buildings, water tanks and other structures made of reinforced concrete and did not resume his work on concrete bridges until the early 1920s.
E
E. His most important breakthrough during this period was the development of the deck-stiffened arch, the first example of which was the Flienglibach Bridge, built in 1923. An arch bridge is somewhat like an inverted cable. A cable curves downward when a weight is hung from it, an arch bridge curves upward to support the roadway and the compression in the arch balances the dead load of the traffic. For aesthetic reasons, Maillart wanted a thinner arch and his solution was to connect the arch to the roadway with transverse walls. In this way, Maillart justified making the arch as thin as he could reasonably build it. His analysis accurately predicted the behaviour of the bridge but the leading authorities of Swiss engineering would argue against his methods for the next quarter of a century.
F
F. Over the next 10 years, Maillart concentrated on refining the visual appearance of the deck-stiffened arch. His best-known structure is the Salginatobel Bridge, completed in 1930. He won the competition for the contract because his design was the least expensive of the 19 submitted - the bridge and road were built for only 700,000 Swiss francs, equivalent to some $3.5 million today. Salginatobel was also Maillart’s longest span, at 90 metres and it had the most dramatic setting of all his structures, vaulting 80 metres above the ravine of the Salgina brook. In 1991 it became the first concrete bridge to be designated an international historic landmark.
G
G. Before his death in 1940, Maillart completed other remarkable bridges and continued to refine his designs. However, architects often recognised the high quality of Maillart’s structures before his fellow engineers did and in 1947 the architectural section of the Museum of Modern Art in New York City devoted a major exhibition entirely to his works. In contrast, very few American structural engineers at that time had even heard of Maillart. In the following years, however, engineers realised that Maillart’s bridges were more than just aesthetically pleasing - they were technically unsurpassed. Maillart’s hollow-box arch became the dominant design form for medium and long- span concrete bridges in the US. In Switzerland, professors finally began to teach Maillart’s ideas, which then influenced a new generation of designers. 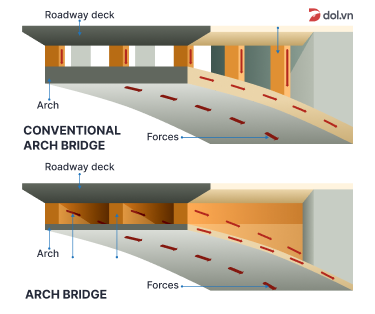 8
9
10
﻿
8
﻿
﻿
9
﻿
﻿
﻿
10
﻿
﻿
Question 11 - 14
Complete each of the following statements with the best ending A-G from the box below.
List of Endings
A
prove that local people were wrong.
B
find work in Switzerland.
C
win more building commissions.
D
reduce the amount of raw material required.
E
recognise his technical skills.
F
capitalise on the spectacular terrain.
G
improve the appearance of his bridges.
Maillart designed the hollow-box arch in order to
11
Following the construction of the Tavanasa Bridge, Maillart failed to
12
The transverse walls of the Flienglibach Bridge allowed Maillart to
13
Of all his bridges, the Salginatobel enabled Maillart to
14