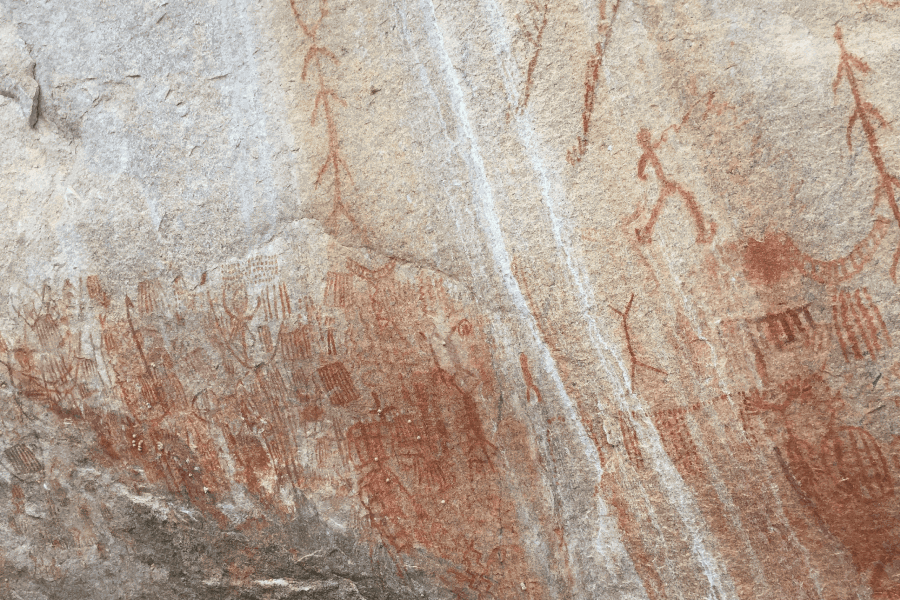 America’s oldest art?
Set within treacherously steep cliffs, and hidden away valleys of northeast Brazil, is some of Southeast America’s most significant and spectacular rock-art. Most of the art so far discovered from the ongoing excavations comes from the archaeologically – important National Park o’ the Serra da Capivara in the state of Piaui, and it is causing quite a controversy. The reason for the uproar? The art is being dated to around 25,000 or perhaps. According to some archaeologists, even 36,000 years ago. If correct, this is set to challenge the widely field view that the America were first colonized from the north, via the Bering Straits from eastern Siberia at around 10.000 BC. only moving down into Central and South America in the millennia thereafter. Prior to the designation of 130,000 hectares as a National Park, the rock-art sites were difficult to get to and often dangerous to enter. In ancient times, this inaccessibility must have heightened the importance of the sites, and indeed of the people who painted on the rocks. Wild animals and human figures dominate the art and are incorporated into often-complex scenes involving hunting, supernatural beings, fighting and dancing. The artists depicted the animals that roamed the local ancient brushwood forest. The large mammals are usually painted in groups and tend to be shown a running stance, as though trying to escape from hunting parties. Processions – lines of human and animal figures – also appear of great impotence to these ancient artists. Might such lines represent family units or groups of warriors? On a number of panels, rows of stylized figures, some numbering up to 30 individual figures, were painted using the natural undulating contours of the rock surface, so evoking the contours of the seconding landscape Other interesting, but very rare, occurrences are scenes that show small human figures holding on to and dancing around a tree, possibly involved in some tom of a ritual dance. Due to the favourable climatic conditions. the imagery on many panels is in a remarkable state of preservation. Despite this, however, there are serious conservation issues that affect their long term survival. The chemical and mineral quantities of the rock on which the imagery is panted is fragile and on several panels it is unstable. As well as the secretion of sodium carbonate on the rock surface, complete panel sections have, over the ancient and recent past, broken away from the main rock surface. These have then become buried and sealed into sometimes-ancient floor deposits. Perversely, this form of natural erosion and subsequent deposition has assisted archaeologists in dating several major rock-art sites. Of course, dating the art is extremely difficult oven the non-existence of plant and animal remains that might be scientifically dated. However, there am a small number of sites in the Serra da Capivara that are giving up their secrets through good systematic excavation. Thus, at Toca do Roqiomo da Pedra Furada. rock-art researcher Niéde Guidon managed to obtain a number of dates. At different levels of excavation, she located fallen painted rock fragments, which she was able to dale to at least 36,000 years ago. Along with toe painted fragments, crude stone tools were found. Also discovered wore a series of scientifically datable sites of fireplaces, or hearths, the earliest dated to 46,000 BC. arguably the oldest dates for human habitation in the America. However, these conclusions are net without controversy. Critics, mainly from North America, have suggested that the hearths may in fact be a natural phenomenon, the result of seasonal brushwood fires. Several North American researchers have gone further and suggested that the rock art from this site dates from no earlier than about 3,730 years age, based on the results of limited radiocarbon dating. Adding further fool to the general debate is the fact that the artists in the area of the National Hark tended not to draw over old motifs (as often occurs with rock-art), which makes it hard to work out the relative chronology of the images or styles. However, the diversity of imagery and tho narrative the paintings create from each of the many sites within the National Park suggests different artists were probably making their art at efferent times, and potentially using each site over many thousands of years. With fierce debates thus raging over the dating, where these artists originate from is also still very much open to speculation. The traditional view ignores the early dating evidence from the South American rock-art sites. In a revised scenario, some palaeo – anthropologists are now suggesting that modern humans may’ have migrated from Africa using the strong currents of the Atlantic Ocean some 63.000 years or more ago, while others suggest a more improbable colonization coming from the Pacific Ocean. Yet, while ether hypothesis is plausible, there is still no supporting archaeological evidence between the South American coastline and the interior. Rather, it seems possible that there were a number of waves of human colonization of the Americas occurring possibly over a 60,000-100,000 year period, probably using the Bering Straits as a land bridge to cross into the Americas. Despite the compelling evidence from South America, it stands alone: the earliest secure human evidence yet found in the state of Oregon in North America only dates to 12,300 years BC. So this is a fierce debate that is likely to go on for many more years. However, the splendid rock art and its allied anthropology of northeast of Brazil, described here, is playing a huge and significant role in the discussion.

Question 1 - 3
Choose appropriate options A, B, C or D.
1
According to the first paragraph, the rock-art in Serra da Capivara may revolutionize accepted ideas about
A
the way primitive people lived in North America.
B
the date when the earliest people arrived in South America.
C
the origin of the people who crossed the Bering Straits.
D
the variety of cultures which developed in South America.
2
How did the ancient artists use the form of the rock where they painted?
A
to mimic the shape of the countryside nearby
B
to emphasize the shape of different animals
C
to give added light and shade to their paintings
D
to give the impression of distance in complex works
3
In the fourth paragraph, what does the winter say is unusual about the rock-artists of Serra da Capivara?
A
They had a very wide range of subject-matter.
B
Their work often appears to be illustrating a story.
C
They tended to use a variety of styles in one painting.
D
They rarely made new paintings on top of old ones.
Question 4 - 10
Do the following statements agree with the information given in the Reading Passage?
In following statements below, choose
YES if the statement agrees with the information
NO if the statement contradicts the information
NOT GIVEN if it is impossible to say what the writer thinks about this
4
Archaeologists have completed their survey of the rock-art in Piaui.
5
The location of the rock-art suggests that the artists had a significant role in their society.
6
The paintings of animals show they were regarded as sacred by the ancient humans.
7
Some damage to paintings is most likely due to changes in the weather of the region.
8
The fact that some paintings wore buried is useful to archaeologists.
9
The tools found near some paintings were probably used for hunting animals.
10
The North American researchers have confirmed Niede Guidons dating of the paintings.
Question 11 - 14
Complete each sentence with the correct ending. A-F below.
Write the correct letter A-F.
List of Endings
A
are giving rise to a great deal of debate among palaeo-anthropologists.
B
do not support the earliest dates suggested for the arrival of people in America.
C
are absent from rock-art sites In the Serra da Capivara.
D
have not been accepted by academics outside America.
E
centre on whether or not they are actually man-made.
F
reflect the advances in scientific dating methods.
Materials derived from plants or animals
11
The discussions about the ancient hearths
12
Theories about where the first South Americans originated from
13
The finds of archaeologists in Oregon
14

-> Đáp án: B. the date when the earliest people arrived in South America.