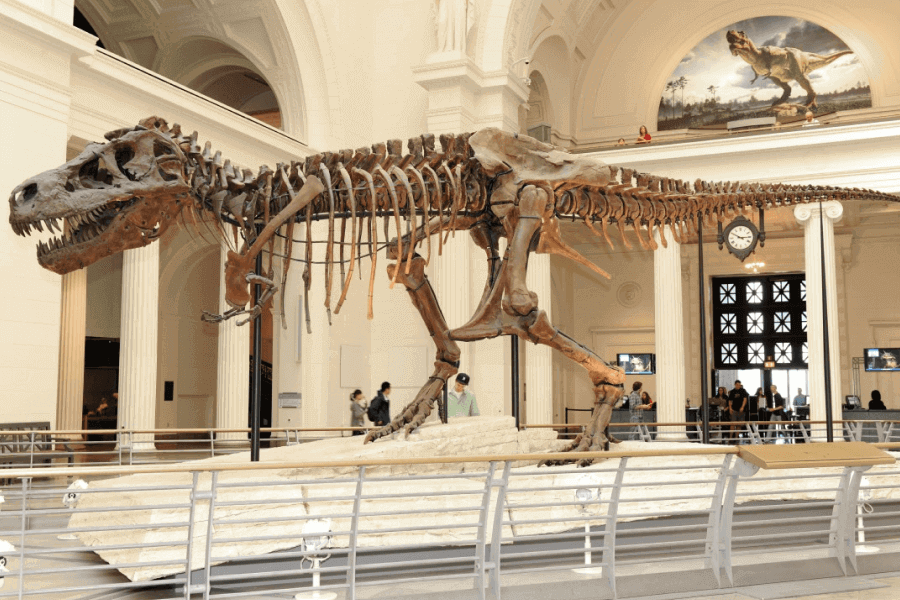 T-Rex: Hunter or Scavenger?
Jack Homer is an unlikely academic: his dyslexia is so bad that he has trouble reading a book. But he can read the imprint of life in sandstone or muddy shale across a distance of l00 years, and it is this gift that has made him curator of palaeontology at Montana State University’s Museum of the Rockies, the leader of a multi-million dollar scientific project to expose a complete slice of life 68 million years ago, and a consultant to Steven Spielberg and other Hollywood figures. His father had a sand and gravel quarry in Montana, and the young Horner was a collector of stones and bones, complete with notes about when and where he found them. “My father had owned a ranch when he was younger, in Montana,” he says. “He was enough of a geologist, being a sand and gravel man, to have a pretty good notion that they were dinosaur bones. So when I was eight years old he took me back to the area that had been his ranch, to where he had seen these big old bones. I picked up one. I am pretty sure it was the upper arm bone of a duckbilled dinosaur: it probably wasn’t a duckbilled dinosaur but closely related to that. I catalogued it, and took good care of it, and then later when I was in high school; excavated my first dinosaur skeleton. It obviously started earlier than eight and I literally have been driven ever since. I feel like I was born this way.” Horner spent seven years at university, but never graduated. “I have a learning disability, I would call it a learning difference - dyslexia, they call it - and I just had a terrible time with English and foreign languages and things like that. For a degree in geology or biology they required two years of a foreign language. There was no way in the world I could do that. In fact, I didn’t really pass English. So I couldn’t get a degree, I just wasn’t capable of it. But I took all of the courses required and I wrote a thesis and I did all sorts of things. So I have the education, I just don’t have the piece of paper,” he says. “We definitely know we are working on a very broad coastal plain with the streams and rivers bordered by conifers and hardwood plants, and the areas in between these rivers were probably fern-covered. There were no grasses at all: just ferns and bushes - an unusual landscape, kind of taking the south-eastern United States - Georgia, Florida - and mixing it with the moors of England and flattening it out,” he says. “Triceratops is very common: they are the cows of the Cretaceous, they are everywhere. Duckbilled dinosaurs are relatively common but not as common as triceratops and T-rex, for a meat-eating dinosaur, is very common. What we would consider the predator-prey ratio seems really off the scale. What is interesting is the little dromaeosaurs, the ones we know for sure were good predators, are haven’t been found.” That is why he sees T-rex not as the lion of the Cretaceous savannah but its vulture. “Look at the wildebeest that migrate in the Serengeti of Africa, a million individuals lose about 200,000 individuals in that annual migration. There is a tremendous carrion base there. And so you have hyenas, you have tremendous numbers of vultures that are scavenging, you don’t have all that many animals that are good predators. If T-rex was a top predator, especially considering how big it is, you’d expect it to be extremely rare, much rarer than the little dromaeosaurs, and yet they are everywhere, they are a dime a dozen,” he says. A 12-tonne T-rex is a lot of vulture, but he doesn’t see the monster as clumsy. He insisted his theory and finding, dedicated to further research upon it, of course, he would like to reevaluate if there is any case that additional evidence found or explanation raised by others in the future. He examined the leg bones of the T-rex, and compared the length of the thigh bone (upper leg), to the shin bone (lower leg). He found that the thigh bone was equal in length or slightly longer than the shin bone, and much thicker and heavier, which proves that the animal was built to be a slow walker rather than fast running. On the other hand, the fossils of fast hunting dinosaurs always showed that the shin bone was longer than the thigh bone. This same truth can be observed in many animals of today which are designed to run fast: the ostrich, cheetah, etc. He also studied the fossil teeth of the T-rex, and compared them with the teeth of the Velociraptor, and put the nail in the coffin of the “hunter T-rex theory”. The Velociraptor’s teeth which like stake knives: sharp, razor-edged, and capable of tearing through flesh with ease. The T-rex’s teeth were huge, sharp at their tip, but blunt, propelled by enormous jaw muscles, which enabled them to only crush bones. With the evidence presented in his documentary, Horner was able to prove that the idea of the T-rex as being a hunting and ruthless killing machine is probably just a myth. In light of the scientific clues he was able to unearth, the T-rex was a slow, sluggish animal which had poor vision, an extraordinary sense of smell, that often reached its “prey” after the real hunters were done feeding, and sometimes it had to scare the hunters away from a corpse. In order to do that, the T-rex had to have been ugly, nasty-looking, and stinky. This is actually true of nearly all scavenger animals. They are usually vile and nasty looking.

Question 1 - 7
Do the following statements agree with the information given in the Reading Passage?
TRUE if the statement agrees with the information
FALSE if the statement contradicts the information
NOT GIVEN if it is impossible to say what the writer thinks about this
1
Jack Horner knew exactly the bone picked up in his father’s ranch belonged to a certain dinosaur when he was at the age of 8.
2
ack Horner achieved a distinctive degree in university when he graduated.
3
Jack Horner believes that the number of prey should be more than that of predators.
4
T-rex’s number is equivalent to the number of vulture in the Serengeti.
5
The hypothesis that T-rex is top predator conflicts with the fact of predator-prey ratio which Jack found.
6
Jack Horner refused to accept any other viewpoints about T-rex’s theory.
7
Jack Horner is the first man that discovered T-rex’s bones in the world.
Question 8 - 13
Complete the following summary of the paragraphs of Reading Passage, using NO MORE THAN TWO WORDS from the Reading Passage for each answer.
Jack Horner found that T-rex’s
8
﻿ is shorter than the thigh bone,which demonstrated that it was actually a
9
﻿, unlike other swift animals such as ostrich or
10
﻿ that was built to
11
﻿. Another explanation support his idea is that T-rex’s teeth were rather
12
﻿, which only allowed T-rex to
13
﻿ hard bones instead of tearing flesh like Velociraptor.