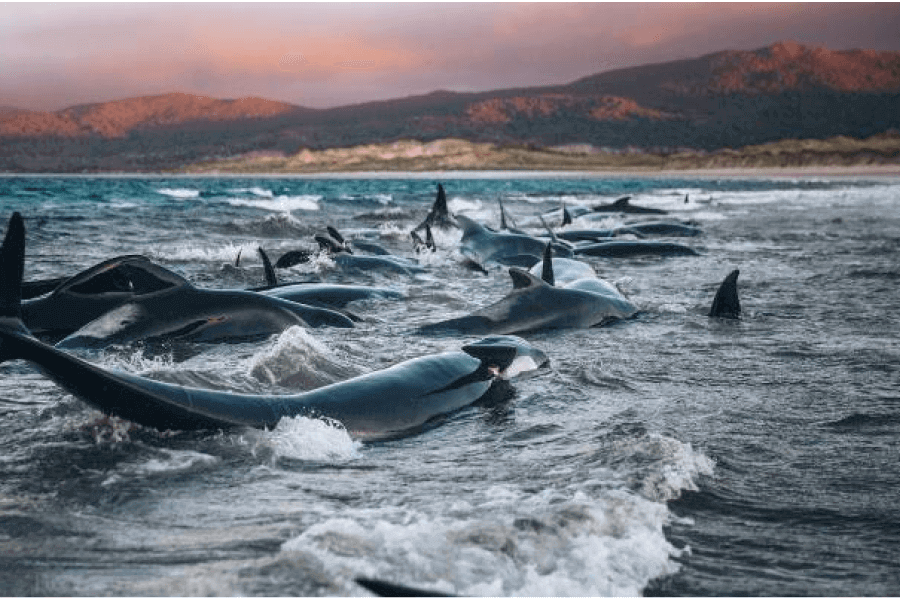 Whale Strandings
Why do whales leave the ocean and become stuck on beaches?
When the last stranded whale of a group eventually dies, the story does not end there. A team of researchers begins to investigate, collecting skin samples for instance, recording anything that could help them answer the crucial question: why? Theories abound, some more convincing than others. In recent years, navy sonar has been accused of causing certain whales to strand. It is known that noise pollution from offshore industry, shipping and sonar can impair underwater communication, but can it really drive whales onto our beaches? In 1998, researchers at the Pelagos Cetacean Research Institute, a Greek nonprofit scientific group, linked whale strandings with low frequency sonar tests being carried out by the North Atlantic Treaty Organisation (NATO). They recorded the stranding of 12 Cuvier’s beaked whales over 38.2 kilometres of coastline. NATO later admitted it had been testing new sonar technology in the same area at the time as the strandings had occurred. ‘Mass’ whale strandings involve four or more animals. Typically they all wash ashore together, but in mass atypical strandings (such as the one in Greece), the whales don't strand as a group; they are scattered over a larger area. For humans, hearing a sudden loud noise might prove frightening, but it does not induce mass fatality. For whales, on the other hand, there is a theory on how sonar can kill. The noise can surprise the animal, causing it to swim too quickly to the surface. The result is decompression sickness, a hazard human divers know all too well. If a diver ascends too quickly from a high-pressure underwater environment to a lower-pressure one, gases dissolved in blood and tissue expand and form bubbles. The bubbles block the flow of blood to vital organs, and can ultimately lead to death. Plausible as this seems, it is still a theory and based on our more comprehensive knowledge of land based animals. For this reason, some scientists are wary. Whale expert Karen Evans is one such scientist. Another is Rosemary Gales, a leading expert on whale strandings. She says sonar technology cannot always be blamed for mass strandings. "It’s a case by case situation. Whales have been stranding for a very long time pre-sonar.” And when 80% of all Australian whale strandings occur around Tasmania, Gales and her team must continue in the search for answers. When animals beach next to each other at the same time, the most common cause has nothing to do with humans at all. "They're highly social creatures,” says Gales. "When they mass strand it’s complete panic and chaos. If one of the group strands and sounds the alarm, others will try to swim to its aid, and become stuck themselves.” Activities such as sonar testing can hint at when a stranding may occur, but if conservationists are to reduce the number of strandings, or improve rescue operations, they need information on where strandings are likely to occur as well. With this in mind, Ralph James, physicist at the University of Western Australia in Perth, thinks he may have discovered why whales turn up only on some beaches. In 1986 he went to Augusta, Western Australia, where more than 100 false killer whales had beached. “I found out from chatting to the locals that whales had been stranding there for decades. So I asked myself, what is it about this beach?” From this question that James pondered over 20 years ago, grew the university's Whale Stranding Analysis Project. Data has since revealed that all mass strandings around Australia occur on gently sloping sandy beaches, some with inclines of less than 0.5%. For whale species that depend on an echolocation system to navigate, this kind of beach spells disaster. Usually, as they swim, they make clicking noises, and the resulting sound waves are reflected in an echo and travel back to them. Flowever, these just fade out on shallow beaches, so the whale doesn’t hear an echo and it crashes onto the shore. But that is not all. Physics, it appears, can help with the when as well as the where. The ocean is full of bubbles. Larger ones rise quickly to the surface and disappear, whilst smaller ones called microbubbles can last for days. It is these that absorb whale 'clicks! "Rough weather generates more bubbles than usual,” James adds. So, during and after a storm, echolocating whales are essentially swimming blind. Last year was a bad one for strandings in Australia. Can we predict if this or any other year will be any better? Some scientists believe we can. They have found trends which could be used to forecast ‘bad years’ for strandings in the future. In 2005, a survey by Klaus Vanselow and Klaus Ricklefs of sperm whale strandings in the North Sea even found a correlation between these and the sunspot cycle, and suggested that changes in the Earth’s magnetic field might be involved. But others are sceptical. “Their study was interesting ... but the analyses they used were flawed on a number of levels,” says Evans. In the same year, she coauthored a study on. Australian strandings that uncovered a completely different trend. “We analysed data from 1920 to 2002 ... and observed a clear periodicity in the number of whales stranded each year that coincides with a major climatic cycle.” To put it more simply, she says, in the years when strong westerly and southerly winds bring cool water rich in nutrients closer to the Australia coast, there is an increase in the number of fish. The whales follow. So what causes mass strandings? “It's probably many different components,” says James. And he is probably right. But the point is we now know what many of those components are. 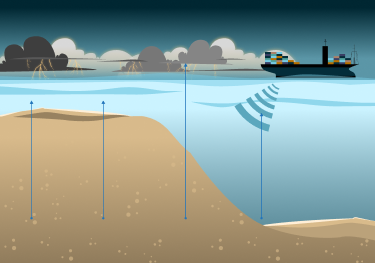 5
6
7
8
Because
5
﻿
disappear on shallow beaches, whales don't realise the beach is near.
Extra
6
﻿
in the water attract fish and therefore whales to South Australian coasts.
Storms create
7
﻿
which absorb whales' clicks.
Sonar may result in a blocked supply of
8
﻿
in whale bodies.
Question 9 - 13
Do the following statements agree with the information given in the Reading Passage?
In following statements below, choose
TRUE if the statement agrees with the information
FALSE if the statement contradicts the information
NOT GIVEN if it is impossible to say what the writer thinks about this
9
The aim of the research by the Pelagos Institute in 1998 was to prove that navy sonar was responsible for whale strandings.
10
The whales stranded in Greece were found at different points along the coast.
11
Rosemary Gales has questioned the research techniques used by the Greek scientists.
12
According to Gales, whales are likely to try to help another whale in trouble.
13
There is now agreement amongst scientists that changes in the Earth’s magnetic fields contribute to whale strandings.